The mayor wants 400 free hotspots next year: The city will allow use of public property to assist in antenna location by private firms who will obtain contracts. The proposal will also cut fiber optic fees to promote extension of those lines to 80 percent of Parisian buildings by 2010.

Global access aggregator and end-point security provider iPass punts: Thames Online, which operates Wi-Fi along a 10-mile stretch of that well-known river in London, will allow iPass customers to roam onto their network. The network reaches 250,000 residents, and sees 2,000 daily users who commute along the river or work at locations nearby. iPass resells access from over 50,000 hotspots worldwide to corporations through a single login and unified, electronic billing.

The Spanish airport authority has approved installations of Wi-Fi in 23 locations: Barcelona, Bilbao, Madrid, and Malaga are already up and running, with 19 to go over the next 18 months. The service combines public access for passengers with airport operations networking that includes voice over IP. The Madrid network comprises 1,000 radios!

The firm announced today that Vladivostok, Khabarovsk, Omsk, and Novokuznetsk have broadband wireless coverage: This is a total of 15 regional capital cities with their service; they’ll grow to 29 regional capitals by the end of 2007. So far, the company says, they’ve signed up 2,000 users in their initial cities. Service with Internet and voice service starts at $49 per month. They use Alvarion and Infinet Wireless equipment.

El Pais reports that about 6m Spanish computer users connect via Wi-Fi, primarily in the largest cities: THe paper puts Madrid and Barcelona in the top two positions, with over 800,000 users and 700,000 users, respectively. Valencia, Seville, and Bilbao are 3, 4, and 5 with substantially fewer (about 300K, 250K, and 150K).

Barcelona has the most access points (21K), but I’m missing a subtlety of Spanish: most are “son privados,” which I think means intended to be private, and the rest are “privados,” which just means private. (Native speaker help here, please?)

The top six cities have about 2,500 commercial hotspots, half of which are in hotels, bars, and restaurants.

Silicon.com says widespread Wi-Fi ignorance among tap pullers: Silicon.com found that the service is up and running as expected in many locations, but that staff on site have no blooming idea what in Hades you’re talking about. The Cloud, which equips 1,000 pubs with Wi-Fi, is working on an education campaign for its locations. Their marketing head was quite honest about its use, too: “Wireless internet use in pubs is fairly sporadic but we see them as an excellent target looking forward to the next few years.”

This makes perfect sense: As handheld devices increasingly have Wi-Fi, it’s much more likely to be used by those who frequent a pub. Laptops? Not so likely.

A private firm with city and university support has installed free Wi-Fi: The Italian town benefits from the interest in experimentation, with the local university and foundations named after Marconi—it’s his home town, after all—contribute to the effort in exchange for testing ideas. The network, built by HI-TEL Italia working with local ISP Acantho uses RoamAD equipment.

BT Will Cover 12 Cities with Wi-Fi

BT will compete with The Cloud on unwiring UK cities: The telecoms giant said that they will be working with Intel to unwire 12 cities, starting with Birmingham, Cardiff, Edinburgh, Leeds, Liverpool, and Westminster; six others haven’t yet been named. The company says they will work closely with local councils to focus initial rollouts on areas the cities deem important, such as deprived areas. Other cities may want handheld video for municipal workers. The first phase will be up and running by Feb 2007.

With BT’s emerging UMA focus—that’s unlicensed mobile access, or a seamless merge of Wi-Fi networks and cell networks for phone calls—offering more Wi-Fi over large areas offers them more opportunity to serve more calls at lower cost, and possibly with higher quality. Cell service, UMA, and metro-scale Wi-Fi all go hand in hand. BT currently offers a limited cell plus Bluetooth service, but will add Wi-Fi to some cell phones and plans in third quarter.

BT’s group director of mobility is quoted in this story about the interest by smaller towns. They were “inundated” with requests and will be “happy to work in partnership with them.” Some cities may co-invest with BT on providing service.

The Cloud, a hotspot network, announced plans in January to cover nine city centres with Wi-Fi, including the City of London, Manchester, and Birmingham. Birmingham has scored two goals here: they’ll have local Wi-Fi competition.

In Edinburgh, there’s particular interest because it would be the first city in Scotland to have city-wide coverage.

The Cloud’s UltraWiFi offering provides unlimited usage on its network for £11.99 ($22.50) per month with 1-year commitment: The subscription will be available starting 1 July 2006. This is a shot across the bow to every single other Wi-Fi provider in the UK, where rates are typically astoundingly and irritatingly high compared to the U.S.  and Asia. Europe has generally remained at a two to three times multiple over prices in those regions.

UltraWiFi comes in two flavors: Monthly for £11.99 with a one-year commitment, and weekly at the same rate of £11.99 but on a pay-as-you-go basis. That is, a week of unlimited Wi-Fi (any week you choose) is the same as a month without the ongoing commitment.

Because The Cloud has over 7,000 locations, including railroad stations, hotels, and airports, this pricing should produce a squeeze on competitors operating in similar venues, notably T-Mobile UK. The Cloud will start offering city centre service in the City of London soon, and in eight other UK centres in the coming months. This kind of pricing and coverage makes Wi-Fi a practical alternative to mobile phone service, or at least a good complement for dual-mode phones. The Guardian writes more about this.

Update: An alert reader noted that T-Mobile UK has a very aggressive 3G cellular data plan that throws in Wi-Fi access. Sign up with a 12-month plan for Web ‘n’ Walk Professional and get a PC Card, quasi-unlimited 3G service, and 12 months of unlimited Wi-Fi service for £20 ($38) per month. The card is £60 with a 12-month plan or free with an 18-month commitment. (Quasi-unlimited? Like most cell operators, T-Mobile says any word means whatever they want it to mean. A long footnote explains that usage of more than 2 GB of data transfer per month will be scrutinized, and you could be throttled down after two consecutive months of such use. VoIP is prohibited.) In the US, T-Mobile offers unlimited GPRS plus unlimited Wi-Fi to voice subscribers for $50 per month with a year’s commitment.

The French telecom competitor adds calls over Wi-Fi to settop box: The company’s Freebox already offered unlimited domestic calls (to landlines and metropolitan areas) and unlimited calls to 14 other countries. The new version adds VoIP over Wi-Fi and will work with Wi-Fi-only handsets or dual-mode handsets, although they don’t have deal with a mobile operator yet. The new service also adds high-definition television channels. All that for €29.99 per month! 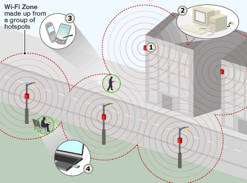 Hopling, KPN installed service in 20 major and 50 smaller stations for the National Dutch Rail Authority: Hopling uses mesh networking to provide service across the larger stations, and simpler points of service for the smaller ones.

Thames Online Service adds eight miles of river-covering Wi-Fi: Ah, punt down the Thames in London (if you dare) and use free Wi-Fi during this trial phase. It will later be US$5 an hour.

A Sunday Times of London columnist shreds the notion of for-fee Wi-Fi: He doesn’t like paying for Wi-Fi, for starters, and especially not the prices that are considered reasonable in England. He’s complained to Britain’s spectrum regulator, Ofcom, which seemed to have little interest, and wonders why Wi-Fi hasn’t graduated to amenity status. He notes that two major networks, BT OpenZone and T-Mobile charge £6 and £5 per hour, respectively. (It would be hard to find a US service that charged as much as £3.50 or $6 per hour in the U.S., possibly because of so much free competition.)